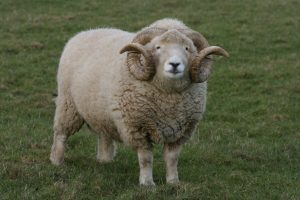 The Exmoor Horn Sheep Breeders’ Society was formed in 1906 and celebrated its Centenary year in 2006. On August 20th, 1907, the first Registered Sale and Show was held at Winsford, Somerset, when ”1,200 ewes were sold by auction, at an average price per head of 42 Shillings.”

Exmoor Horn Sheep have been on Exmoor since time immemorial and have always been valued for their hardiness, ability to thrive, and quality of fleece and meat.

These values are just as relevant now at the beginning of the 21st Century. Indeed, the significant changes to British farming policy have ensured a place for the Exmoor Horn Sheep in many farming businesses future plans. With its ability to fit into environmentally sensitive and conservation landscapes, as well as its commercial value to produce purebred or cross-bred lamb with added-value and marketing potential, the Exmoor Horn continues to deliver good value and good sense to farmers and keepers of the breed as it has done for many centuries past.